Since there is an increasing demand for an english version of my blog I start to translate some of the articles into english. I might switch to a complete english version in the future since most germans are good english speakers anyway.

"The world is changed. I feel it in the water. I feel it in the earth. I smell it in the air. Much that once was is lost, for none live who remember it."The lord of the rings fans among you might recognize this quote. But for us maltheads this quote might be appropriate too. Who didn't mourn all the countless closed and mothballed distilleries on their virtual or real whisky trails? But let the past be the past. And you can definitely say that the world of whisky has changed and still changes. There is a lot of movement it he whisky industry in Scotland as well as in other countries. The 80 depression is long gone and the whisky boom is still on the rise. Therefore many new distilleries are being built and new projects are being announced frequently. Kilchoman (Scotland), Kavalan (Taiwan) and Warenghem (Brittany) have proved that young Single Malt can indeed be successful. About time for the Malt Mariners to do their job as pioneers and explorers and set the sails to unknown territory. I (Leon) traveled Scotland for a while and visited among others three new-born Malt Whisky Distilleries: 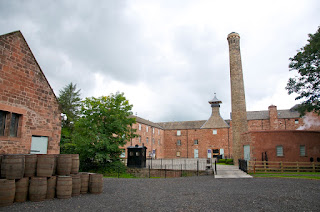 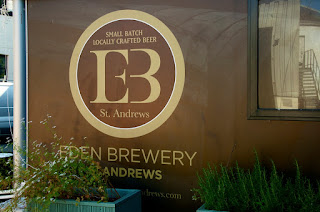 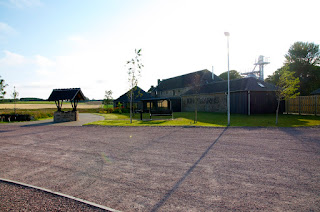 All these three new distilleries are interesting because they are located in the Lowlands and don´t have any self-made whisky to sell yet. So they seem to be perfect for a little challenge. Ill present the distilleries to you and will look on the categories of "location","atmosphere" and last but not least the future single malt.


Annandale Distillery lies near the small town Annan in the Council of Dumfries & Galloway. You can walk to the distillery in 20 minutes from town. Annan itself might not be your ideal place to stay though since there is not much to see. Dumfries might be a better place for a visit, there you have the chance to see several sites of the poet Robert Burns (memorial, mausoleum) and cool stuff like the Camera Obscura which I recommend. 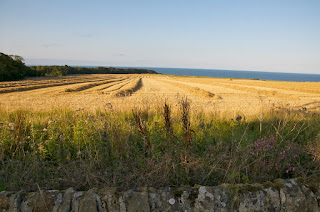 Eden Mill is about 5 miles away from the city center of St Andrews, a gorgeous town right next to the sea with many student and therefore some activities. It is know for its golf course as well if you are into that stuff. Well we´re not but St Andrews is definitely worth a visit thats for sure! You might reach the distillery by Bus in about 15 minutes.


Kingsbarns is about 9 miles away form St Andrews in the opposite direction of Eden Mill. I can´t tell if there are any buses going in this direction but even if, it would take you longer then to Eden Mill. Although you have to say that the view from the car park is more then worth it!
Still the battle for location is won my Eden Mill since its the best to reach. 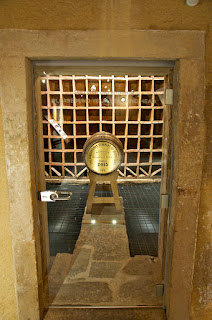 We are talking here about the whole picture of the distillery including the buildings, the visitor center and CI on the website. Kingsbarns is as we mentioned already a very pretty location. From the VC you have a great view over (in my case) sunny barley fields. From the car park you can even see the coastline. The distillery is dominated by stone and wood with hints and clues to be a modern castle.


The VC is simple but has a definite style to it. It is separated into a cafe and a shop area. No hanky panky, just whisky. The tour starts in a kind of mini museum. A nice mix of down-to-earth information and multi media stuff. At the end of the tunnel sits a door protecting the "cask number one" like a crown jewel. I bow to the designers of this part since its really an impressive site. 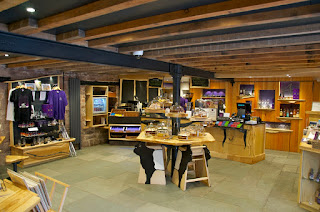 Annandale Distillery was build to be an tourist attraction as well, no doubt. Everything is neat, clean and stylish. For my personal taste a bit over the top. The toilets look like in a very posh hotel (no pics though... I´m a geek but it doesnt go so far!). The design of the visitor center has much carved wood with round shapes and lots of black metal (not the music). There are some whisky gimmicks to find like lampshade made from staves or the cask recycled as a bin. The pagoda roof is sheer cosmetic since it doesn't have a kiln. Well make up your own mind about it but I like it better then the weird fake towers of Kingsbarns. The visitor center is a decent cafe and therefore focused on that aspect. Very cosy with tables, couch and even a modern fireplace. Nice! 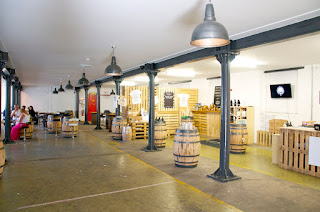 Since Eden Mill is a smaller project with less pocket money in the background is has been built in an old industrial building. Therefore it cant compete with the fancy with the new built tourist attractions. The VC lookes like is has been put up in a hurry in the big visitors room. But still this industrial charming atmosphere might be more authentic for the malthead then the staged new distilleries. The tourist guy will not get the whole package here though.


It was hard to pick a winner in this category. Annadale and Kingsbarns are here even but in the end I´m in charge so I get to decide :). My personal taste said Kingsbarns in the end since the tour area is magnificent.

„No Whisky? What to drink?“


Since non of the three distilleries has bottled legal scotch whisky yet, they all have the same problem: What to serve the guests? Not to mention that they need some money for keeping the spirit flowing. 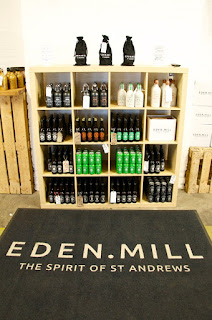 Well, Eden Mill has no problems pooring a glas of something since they started out as a micro brewery. They have a big Gin variety as well to offer. Since I´m an ignorant malthead, I hate Gin so that didnt go on the account of Eden Mill. In fact the opposite is the case. I had a ticket for a VIP tour (present) and had to take a Gin tour instead since the manager wasn´t around as planned. Since I hate Gin that was big down turn on that day since I made quite a way to visit that place. Anyway there is craft beer as well which as a Franconian is like bread and butter to me. Even though we still call it beer. Eden Mill has some very interesting bottlings matured in wine casks. But hey! We´re here for the whisky! Again Eden Mill has a great variety as an answer. They dont have whisky yet but three different types of new spirit. Different maltings made it happen. Therefore we have "St Andrews Day" made from "dark crystal malt", the "Hogmanay" made from "chocolate malt" (yummy) and the "Burns Night" from "pale malt". No peaty ones (for me unfortunately). You can try those and even buy some if you like. If you still want whisky you can buy some bottlings without much information but representing the different regions highlands, Islay and Speyside. Well I still prefer my usual bottlings. I know what I get you know. 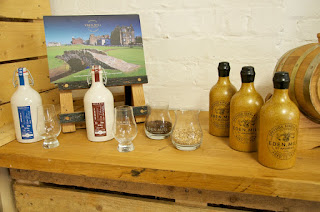 Annandale "solves" the problem of the nonexistent malts with a blended Scotch named "Nations of Scots" that is dedicated to the scots in exile. Although the question is if the blend honors the fellow scots outside the county appropriately. The stuff didn´t float my boat if you know what I mean. But then again... we are waiting for a real malt to be born here. The Annandale newmake, called "rascally liquor" comes in a peated and an unpeated version. It carries no less names then "King o' swords" dedicated to Robert The Bruce (peated) and "King o' words" dedicated to Robert Burns (unpeated). While having the great opportunity to have a managers tour with Malcom Rennie I could taste the young malt of Annandale (a few month old) and I have to say it already had a very tasty character :). I´m definitely looking forward to try the first official bottling here. 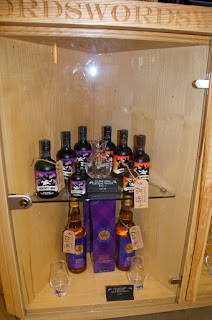 Kingsbarns sells its newmake in the shop as well. Although the distillery is well ahead in the game cause the Wemyss family has sold Scotch whisky way before the distillery was build. The have a few aged blended malts (I prefere the term vatted malts, since it does not contain any grain whisky) in the range such as the "spice king" (good stuff), "the hive" and "the peat chimney" each representing a "style" of whisky. They also have a selection of single cask bottlings with detailed information about the distillery, age and so on. So no need to hide for Kingsbarns in that area. Additionally the wines of the family are being sold in the shop. 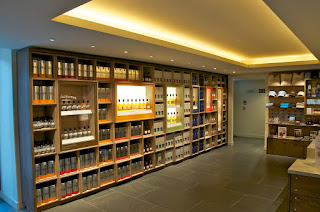 So in the drinks department it was a hard battle between Eden Mill and Kingsbarns. In the end I went with Eden Mill against my wrath against Gin. I am way too curious about their results since they have three different newmakes. The question remains if Germany will see much of their bottlings since they are a small craft enterprise. If we only look at the whisky section Kingsbarns is definitely the winner since people can have a real whisky tasting here already today.


In the end its all about the personal taste, so I dont want to select a winner in total. But we can be certain about one thing: There is a lot of interesting whisky on the way! And we can look ahead to a happy malty future! And until we can enjoy the newcomers... well there is plenty of good malt to kill the time with :).