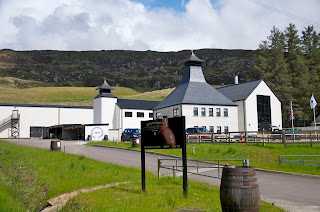 Ardnamurchan could be classified as "the new-spirit-distilleries" that I have reviewed in my article "a new spirit" (both german and english version). They are not the Mini-Micro Distillery like Eden Mill or Strathearn, but they are definitely in the "pretty damn small" distillery category (for me every distillery up to 500.000 litre per anum capacity qualifies for this). These distilleries have in common that they will produce on a small scale and plan to jump in the new spirit of "small but high quality" sector, mainly no plans to color or chillfilter their future whisky. And as mentioned in "the new spirit", they all haven´t got their whisky in bottles yet. For Ardnamurchan Distillery Princess Ann personally filled up the first cask on the 25.06.2014. A cask that was given to the distillery as a kickstarter  from Glenfarclas, a nice gesture if you ask me.


So yeah folks, location! In my imagination the creators of Ardnamurchan had one of those hazy pubnights over a pint and a dram or ten when finally in the later time of the night (or earlier time in the morning) one of the lads came up with the idea that sooner or later every group of men thinks about. "Hey guys... Lets build a disssillery!" Other guy: "Ohhhaa tha suchagood idea! Letsbuildsome where nobody would ever build one!". They must have ripped a map of Scotland of the wall and looked for the most inaccessible part of Scotland. They must have signed the contract the same night, cause if they would have sobered up the next day, they would have realized what they had done. 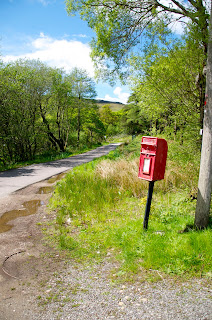 They neat distillery of Ardnamurchan lies in the whisky-sounding place "Glenbeg". I call it place, cause we didn´t see any buildings that classifies Glenbeg as a town or even a village or suggested that there are actually people living near by (But there is a a cafe around! So no fears of sudden death by cofein deprivation). Even from Fort William you should count in about 2 hours to get there (a bit less if you take the Corran ferry for 8 pound). From Glasgow you would look at about 4 hours driving if you are not stopping to take pictures (Your traveling the west of Scotland so forget about that!). And mentioning the driving... The drive to the distillery is not only breathtakingly beautiful but simply as that completely nuts. I can`t recall where Ardbeg got their name for the Rollercoaster bottling from, but Ardnamurchan definitely deserves that kind of name for a bottle or two. Driving down the road to Ardnamurchan is like a wild ride through the forests of middle earth, specially if you are (as I/we are always) late for a distillery tour. Someone filmed his way to the distillery, check this out ;).


The road to this place is so narrow at some points they literally had to build the distillery on those proportions (like the mashtun for example is exactly as wide as the smallest part of the road). This is the video they show in the distillery to demonstrate the effort that was made to build this thing.

The distillery itself is quite neat. Entering the shop I couldn't shake off the feeling that the guy behind the counter looked oddly familiar (two days later I ran into him again at work at GlenDronach where I had seen him a hundred times on the DVD since he worked there as a mashman). Visitor Center: A nice and bright looking shop with some maritime details. The standard tour was 7 £ and was going (like most tours) through every detail of the process including a warehouse right at the start. It was a good tour although I lost track since I´ve heard the process quite some times now. Hard facts about the process: Like many of the young and new distilleries Ardnamurchan works with a quite long fermentation time (72-100 hours), four (quite unusual) oak wooden and three stainless steel washbacks. The cut off point for the foreshots is taken after about 25 min, which is quite late. The tour guidess said they have about 5 hours of middle cut, but I´m quite sure she must have been mistaken since Glengoyne has a middle cut of three, and that is already a veeeery long one. Anyway.
These guys are looking for quality on a small scale no doubt. 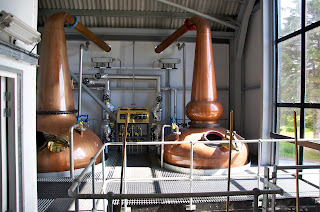 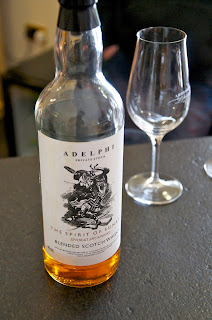 Not surprising since the distillery is owned by the independend bottler Adelphi. Keeping that in mind the only slightly disappointing feature of the tour for me was, that they "only" have a blend in the end and not, say, some of their indi-bottlings to try. But to be fair the blend was quite pleasant, although I will most certainly never become a great blended scotch drinker. We could try the new make as well though, which is a nice feature of some new distilleries. Its always interesting having a look at the base for the future whisky without the cask influence.
So yeah we can look forward to the first bottling of Ardnamurchan in a few years time and add the distillery to our long "young malts to check out in the future" - list. The location is without a doubt an incredible beautiful and remote piece of Scotland and the distillery now kicked Oban Distillery off the throne for being the most western mainland distillery. The Scots love their "highest, smallest, oldest... distilleries", so that might have (just maybe) been one of the real reason for the exact spot on the map (not to mention water source and the owners living near by... So yeah if you could build your own distillery in front of your doorstep... tell me you would`t!)


Résumé: Ardnamurchan distillery is worth a visit if you are anywhere near the peninsular of Ardnamurchan (area around Fort William). The distillery itself does not (yet) offer a extraordinary whisky-experience but is definitely a nice place to visit while enjoying a crazy road trip through the area.